Home > Research > Cell transplantation for the treatment of liver diseases

3. Cell transplantation for the treatment of liver disease

Cell-based therapies have been considered as an alternative to liver transplantation for the treatment of potentially fatal liver diseases. There are mainly 3 purposes for cell transplantation; one is to replace damaged hepatocytes with fresh ones, another is to activate intrinsic liver stem/progenitor cells (LPCs), and the other is to revive the damaged cells in the recipient livers.

Thy1 is well known as a specific marker of oval cells that are one of the hepatic stem cells. Previously, we demonstrated that Thy1+ cells isolated from D-galactosamine (GalN)-treated rat livers were heterogeneous population and that some cells were bipotential hepatic stem cells with the ability to differentiate into hepatocytes through CD44+ SHs and cholangiocytes (7). Recently, we found that the Thy1+ cells have a potential to activate the intrinsic LPCs. When the Thy1+ cells were transplanted into retrorsine/partial hepatectomy (Ret/PH)-treated rat livers, the recipient’s liver rapidly regenerated and its growth continued for about 1 month (Fig. 1), resulting in liver enlargement.

Figure 1. Emergence of SHPC clusters in retrorsine/partial hepatectomy (Ret/PH) model rat livers. Liver/body weight ratio of Control, Thy1, and MH rats were plotted. The liver/body weight ratio of Thy1 rats were significantly larger than those of Control rats at day 14 and 30. The emergence of SHPCs was investigated in Ret/PH model rat livers 14 days post-PH. Pictures shows the enzyme-histochemical analysis of DPPIV and hematoxylin staining. SHPC clusters are encircled by dotted line. DPPIV+ donor cells were engrafted and formed foci after MH transplantation (arrows). Scale bars, 500 μm. The number of SHPC clusters per area and cells per cluster were measured. Transplantation of Thy1+ cells remarkably induced the emergence of SHPCs.

Histological analysis revealed that the hepatomegaly was due to the expansion of small hepatocyte-like progenitor cells (SHPCs). We clarified the mechanism of SHPCs’ expansion (8). Transplanted Thy1+ cells secrete extracellular vesicles (EVs), which were incorporated into resident SECs, Kupffer cells and SHPCs, and then induced the secretion of interleukin 17 (IL17) B, IL25 and IL17RB, respectively (Fig. 2). 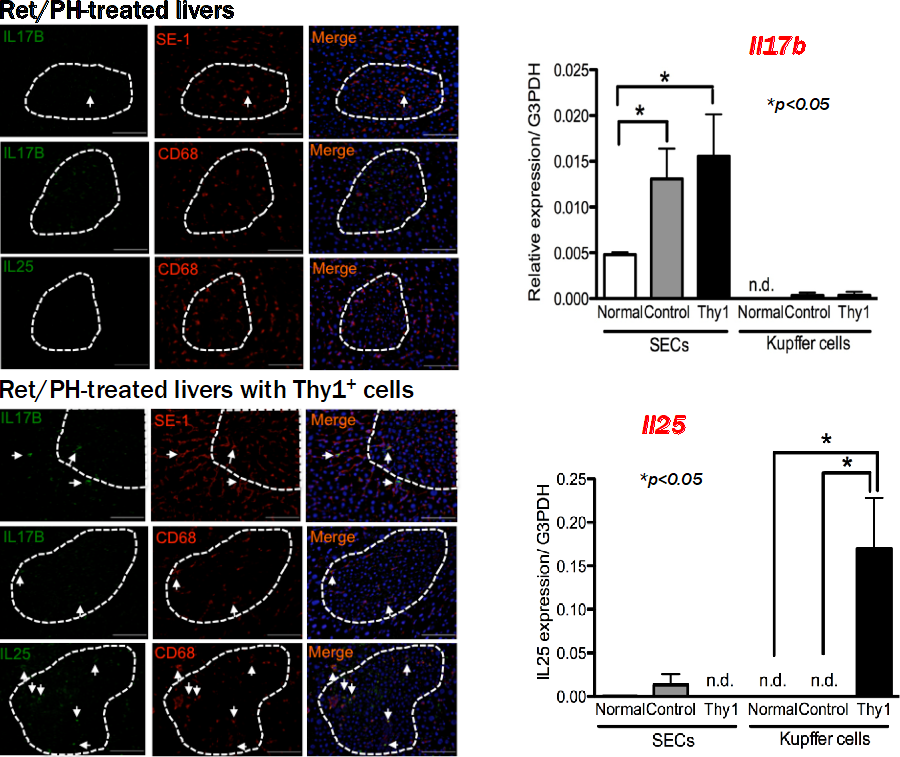 Figure 2. Localization of IL17B and IL25 proteins in SHPCs of Ret/PH model rat livers with Thy1+ cell transplantation. Double immunohistochemistry for IL17B/IL25 and markers of SECs (SE-1) and Kupffer cells (CD68) was performed using Ret/PH model rat livers with (Lower) and without (Upper) Thy1+ cell transplantation 14 days post-PH. The areas of SHPC clusters are surrounded by dotted lines. Arrows indicate double-positive cells. Scale bars, 100 μm. All images are at the same magnification. Induction of IL17b and IL25 expression in SECs and Kupffer cells by realtime-PCR. Gene expression of IL17b (upper) and IL25 (lower) was investigated in SECs and Kupffer cells isolated from livers of normal rats (Normal) and Ret/partial hepatectomy model rat livers with (Thy1) and without Thy1+ cell transplantation (Control) 14 days post-PH. Asterisk indicates statistically significant differences; p< 0.05. Abbreviations: n.d., not determined; SECs, sinusoidal endothelial cells.

Administration of EVs separated from cultured Thy1+ cells also enhanced the expansion of SHPCs (Fig. 3). The interaction of Thy1+ cell transplantation and liver regeneration is summarized in Figure 4. 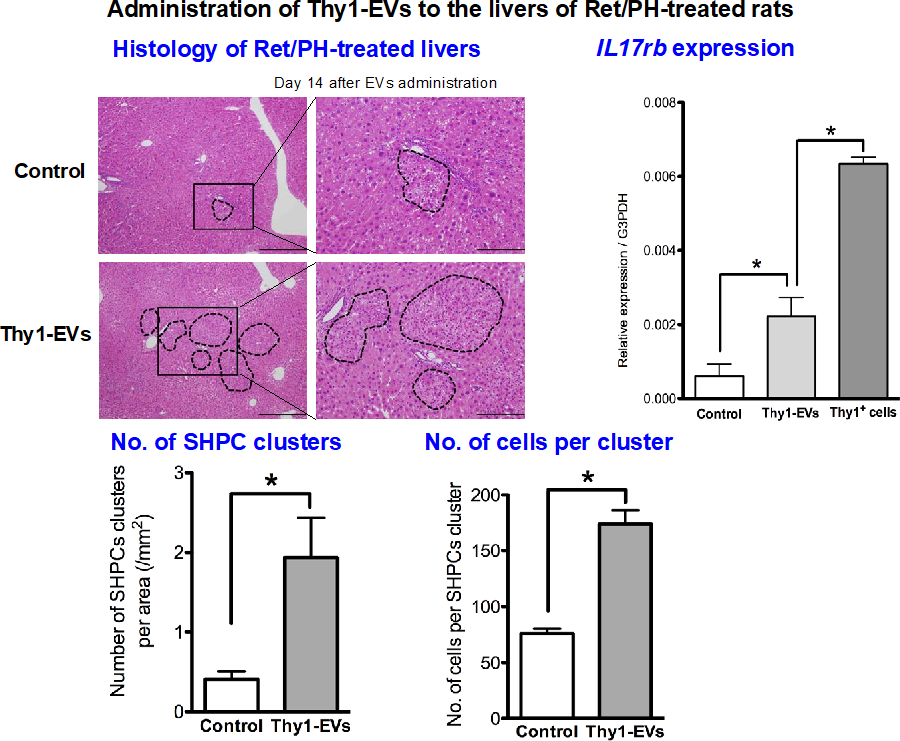 Figure 3. Administration of Thy1-EVs to Ret/partial hepatectomy model rat livers. EVs derived from the conditioned medium of Thy1+ cells for 48 hours were administered via a branch of the portal vein, and livers were examined at 14 days post-administration. Images show H-E staining of a liver section. Many SHPC clusters were detected in livers with Thy1- EVs. Right pictures represent enlargements of the squared areas in left images, respectively. Scale bars, 500 μm and 200 μm. IL17rb expression in SHPCs of livers receiving Thy1+ cell transplantation was confirmed by realtime-PCR. The number of SHPC clusters per area and the number of cells per cluster are shown. Asterisks indicate statistically significant differences; p< 0.05. 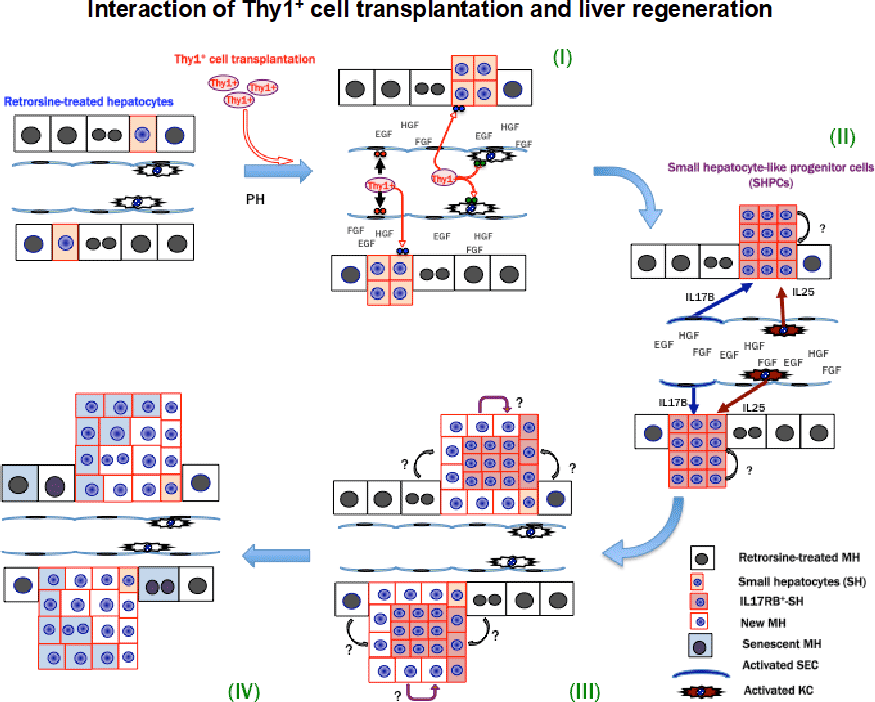 Figure 4. Summary of the interaction of Thy1+ cell transplantation and liver regeneration.

Further experiments are accordingly needed to clarify these issues.