4. Expansion of hepatocytes in vitro

Cell-based therapies, such as cell transplantation, engineered hepatocellular tissue construct and bio-artificial liver devices, may be used as alternatives to whole liver transplantation. These therapies require a large number of healthy hepatocytes, but it is currently not feasible to routinely obtain healthy human hepatocytes because of severe liver donor shortages and a lack of methods to generate functional hepatocytes.

Although mature hepatocytes (MHs) show the high regenerative capacity in vivo, they have not been successfully expanded ex vivo. We found that CD44+ cells sorted from colonies of small hepatocytes (SHs) derived from a healthy adult rat liver can proliferate and passage on a Matrigel-coated dish in serum-free culture medium (10). In addition, a subpopulation of the cells can divide more than 50 times in a period of 4 months every 4-week-passage (Fig. 1). The passaged cells retained the capability to recover highly differentiated functions, such as glycogen storage, CYP activity and bile secretion after overlaid with Matrigel for induction of hepatocyte differentiation. When the 3rd passage cells were treated with Matrigel and then transplanted into Retrorsine/PH-treated rat livers, the cells engrafted to differentiate into MHs and cholangiocytes. On the other hand, the cells without Matrigel could not be engrafted. These results suggest that long-term cultured CD44+ SHs retain hepatocytic characteristics in vitro and the capability to differentiate into hepatocytes and cholangiocytes in vivo. Thus, a newly identified subpopulation of MHs possessing the attributes of hepatocytic stem/progenitor cells can be passaged several times without losing hepatocytic characteristics. 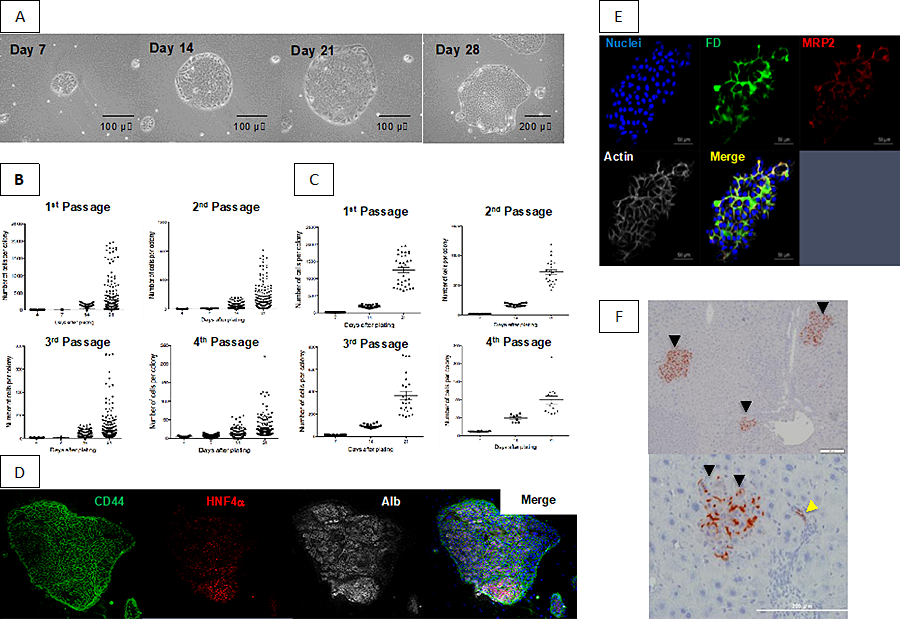 Then, we investigated how the ability of hepatocytic parental progenitor cells (HPPCs) to self‐renew can be maintained and how laminin (LN) isoforms play an important role in their self‐renewal and maturation (11). Hepatocytes isolated from adult rat livers were cultured on hyaluronic acid to form colonies consisting of CD44+ SHs, which could be passaged on dishes coated with Matrigel. When second‐passage cells were plated on Matrigel, LN111, or LN511, HPPCs appeared on Matrigel and LN111 but not on LN511. We identified two types of cells among the second‐passage cells: Small, round cells and large, flat ones were observed on Matrigel, whereas the former and latter ones were specifically attached on LN111 and LN511, respectively (Fig. 2). We hypothesized that small and round cells are the origin of HPPC colonies, and the binding to LN111 could be key to maintaining their self‐renewal capability. Among the integrins involved in LN binding, integrins α3 and β1 were expressed in colonies on LN111 more than in those on LN511, whereas β4 was more strongly expressed in colonies on LN511. Integrin α3highα6β1high cells could form HPPC colonies on LN111 but not on LN511, whereas integrin α6β1low cells could not on either LN111 or LN511. In addition, neutralizing anti‐integrin β1 and anti‐LN111 antibodies inhibited the passaged cells’ ability to attach and form colonies on LN111 by HPPCs. Matrigel overlay induced 2nd‐passage cells growing on LN111 to increase their expression of hepatic functional genes and to form 3‐dimensional colonies with bile canalicular networks, whereas such a shift was poorly induced when they were grown onLN511. These results suggest that the self‐renewal capability of HPPCs depends on LN111 through integrin β1 signaling. 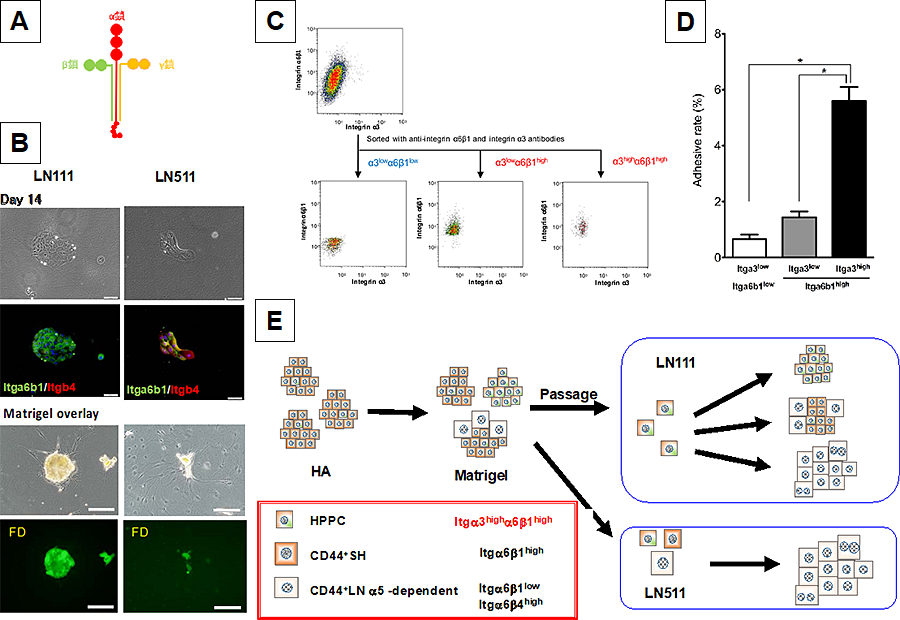